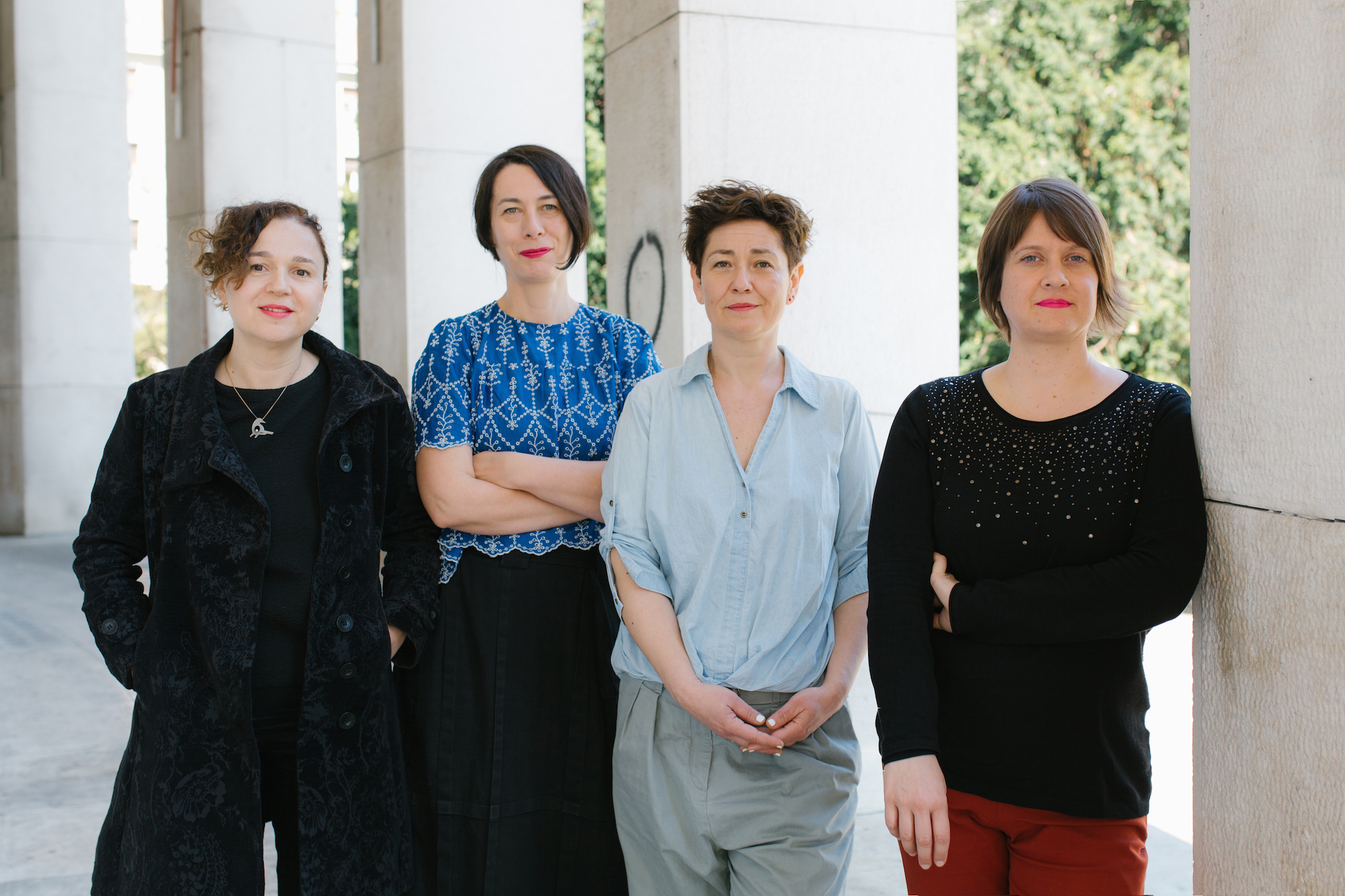 What, How & for Whom/WHW is a curatorial collective formed in 1999 and based in Zagreb and Berlin. Its members are Ivet Ćurlin, Ana Dević, Nataša Ilić and Sabina Sabolović, and designer and publicist Dejan Kršić. WHW organizes a range of production, exhibition and publishing projects and it has been intensively developing models based on collective way of working, creative use of public space and collaboration between partners of different backgrounds. Primarily shaped by the format of the exhibition, WHW projects are conceived as platforms for progressive modes of cultural production and reflections of social reality. What, how and for whom, the three basic questions of every economic organization, concern the planning, concept and realization of exhibitions as well as the production and distribution of artworks and the artist’s position in the labor market. These questions formed the title of WHW’s first project dedicated to the 152nd anniversary of the Communist Manifesto, in 2000 in Zagreb, and became the motto of WHW’s work and the title of the collective.

Since 2003 WHW collective has been running the program of Gallery Nova, a city-owned gallery in Zagreb. Gallery Nova program had been conceived in opposition to dominant representative understanding of culture, and streams towards opening space for public discussion on issues that are ignored, made unfashionable by their lack of glamour and non-marketability, swept under the carpet or even openly suppressed. Gallery Nova program consists of international group exhibitions and solo shows by Croatian and international artists; discursive program encompassing lectures, workshops, seminars and public discussions; as well as a series of publications, whose aim is to create the links between the art practice and wider social context.

WHW is the first recipient of Igor Zabel Award for Culture and Theory in 2008, awarded by Erste Stiftung in recognition of cultural activities related to the Central and South Eastern European region.

In March 2019 members of WHW Ivet Ćurlin, Nataša Ilić and Sabina Sabolović were appointed in 2019 as artistic directors of Kunsthalle Wien in Vienna. WHW as a collective will continue working in Zagreb with collective activities coordinated by WHW member Ana Dević.

Everything we see could also be otherwise (My Sweet Little Lamb), The Showroom, London

So, You Want to See, e-flux gallery, New York

What, How & for Whom, on the occasion of the 152nd anniversary of the Communist Manifesto, HDLU, Zagreb

Each mentor will work closely with one program participant over several months, critically reflecting on their artistic practice, its relationship to this particular moment, and possible paths it might take in the future. Ana Dević i Ana Kovačić, for the WHW, will collaborate with artist Teuta Gatolin.

Conversation about the Trees

This WHW module within WHW Akademija generation 2019/2020 is developed and carried out by Ana Dević/WHW.

What times are these, in which

A conversation about trees is almost a crime

For in doing so we maintain our silence about so much wrongdoing!

And he who walks quietly across the street,

Passes out of the reach of his friends

Who are in danger?

Bertolt Brecht: To Those Who Follow in Our Wake

Lately, I have been thinking a lot about the trees. No, I am not an expert, the truth is, most of the time I am in front of my computer, so I started visiting nearby forests, parks and woods just to move away for a bit. Trees are powerful and ancient symbols in human history and culture that recently became a topic widely revived, popularized and researched by scientists, activists, ecologists, writers and foresters who emphasize a fascinating forest ecosystem. It is a collaborative network of ties and connections with other species, mutual solidarity that I dare to call, if not communist, then a communal one.

My idyllic walks have resulted in discovers of unexpected bolts, not only of historical traces of WWII or the wars of 1990s, but of the devastating effects of the ongoing deforestation, traces of human and non-human migrations of capital and of people.

By focusing on motives of trees and forest as topoi of resistance and resilience as starting points that anchor our 7-month journey, I would like us (like the trees), to germinate and coagulate together, day by day, towards the form of the exhibition at the Gallery Nova in May 2020. Starting from the challenges of cultural and artistic production in the context of peaking adversities (political, economic or ecological), this module builds on artistic and curatorial gestures and strategies available and implementable in the situations of various social foreclosures. The module’s hybrid form will combine show and tell, joint walks into the parks and woods, micro-actions in public spaces, practical artistic exercises involving body movements and self-reflection process. We will be discussing inherent capacity of the cultural production, exhibition genre and artistic actions to enable immersion into social processes that can build together educational, convivial, and communal spaces for us, but also be open to the others.

A question of rethinking artistic production and exhibitions as interventionist forms in ideological, political and material circumstances of delayed neo-liberal adversity will be our background against which examples of artistic practices from Kontakt collection will be viewed alongside a number of other topics and practices. We will place a specific focus on notions of iconography of human gesture, intimacy and collectivity.

What is the role of art, both in direct contemporary politics and in struggles against hegemonic historical revisionism? In what way has the science been political and politicized, and how can we shift it towards assisting people, living beings and communities that really need it today? Can we use the exhibition as a site of (in)visibility and support structure? These are some of the questions I would like to co-create answers to through this course module.