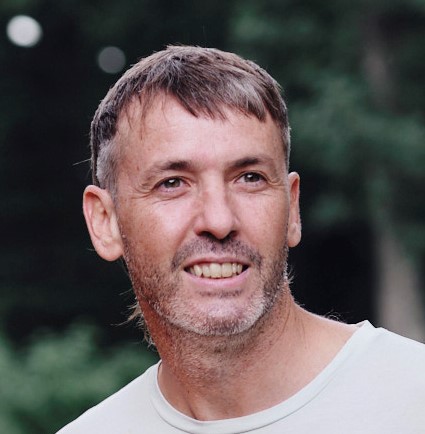 Pablo Martínez is a researcher and educator whose research focuses on the potential of images for constructing political subjectivity, institutional imagination and experimental pedagogies. In the last decade his institutional work has explored the possibilities of an eco-socialist museum: from the creation of a garden in the roof of CA2M and a permanent group of gardening, to open a kitchen at the MACBA and establish a research group on food sovereignty; from seminars about the impact of oil on 20th century culture to debates on agriculture. He worked as Head of Programming at the MACBA from 2016 to 2021 where he also directed the Center of Studies and Documentation and its exhibition programme, the Independent Studies Programme and the et al series of essays (Ed Arcàdia) where he published texts by Elisabeth Lebovici, Marina Garcés, Kristin Ross, Jodi Dean or Jaime Vindel, among others. He worked as Head of Education and Public Activities at CA2M (2009–16), and Associate Professor of Contemporary Art at the Faculty of Fine Arts of the Universidad Complutense de Madrid (2011–15). He's part of the editorial board of L'Internationale Online ( www.internationaleonline.org) as well as of the journal of art and visual culture #Re-visiones (www.re-visiones.net). He is a founder member of Las Lindes, a research and action group working on education and cultural and artistic practices (2009 - today). He curated solo shows of Werker Magazine and Adelita Husni-Bey.

Exercices of institutional imagination. Towards an eco-socialist museum

In 1989, Félix Guattari stated that any effective response to the looming ecological crisis would have to be “on a global scale” by means of a “political, social and cultural revolution”. In times of crisis, like the current one, it is crucial to emphasize the central role of culture in preventing the destruction of the planet, as noted by Guattari. That is, he claimed that such a revolution should not only concern large-scale visible relations, but also “the molecular domains of sensibility, intelligence and desire”. These fall precisely within the realm of art, and by extension - the museum, which is one of the fundamental spaces for envisioning possible worlds to come. The museum can play a key role in shaping subjectivities as well as constructing imaginaries and collective culture. Shared imaginaries give meaning to and structure our social reality, and they can help determine our collective hopes and dreams, so we should acknowledge the power of the museum as an utopian space. No revolution can triumph without desire, and no newly-constructed world can possibly endure if it does not also change sensibilities. If Arthur Rimbaud, the poet of the Commune, called for a kind of art that would “change life”, then, to do so in today’s world, we have to turn our desires on their head: we must resist the urges of blind consumption, we must build cooperative communities, and thus aim to redefine the very notions of freedom, equality, redistribution and limits. With these considerations in mind, as well as the ongoing crisis of the museum as an institution, two vital questions emerge: what sort of museum do we want in today’s world? And then, what sort of world do we want to build, from within the museum? The first question invites us to build a museum that is conscious of its own material reality and ecological impact, so its practices can be modified and defined accordingly. The second question highlights the power of art in forming subjectivities and constructing shared imaginaries that might “change life”. In this seminar we will discuss the possibilities of the eco-social museum as well as the limits and unsustainability of the modern cultural paradigm.

Each mentor will work closely with one program participant over several months, critically reflecting on their artistic practice, its relationship to this particular moment, and possible paths it might take in the future. Pablo Martínez will collaborate with artist Luna Acosta.